Unitronic's philosophy in designing Performance Hardware begins with a complete analysis of the OEM component(s) in various street and track environments to determine overall performance characteristics and shortcomings when exposed to performance demanding scenarios.

All of Unitronic's Performance Hardware products are designed using our in-house 3D Scanner, engineering software suites, and data acquisition tools. With these industry leading resources in-house at our disposal, design aspects and fitment tolerances can be extremely precise; up to four one-thousands of an inch (0.004"), often times more precise than manufacturing equipment can ensure, resulting in maximum fitment precision on each and every product. After platform constraints and OEM components are 3D scanned, all data is imported into our engineering and modeling software, where we can observe and interact with the parameters to design an upgraded performance product to fit the OEM constraints perfectly, while ensuring the technical aspects relating to performance and engineering principles are deployed. These elements combined allow for less development prototyping, faster validation, and strict quality control. 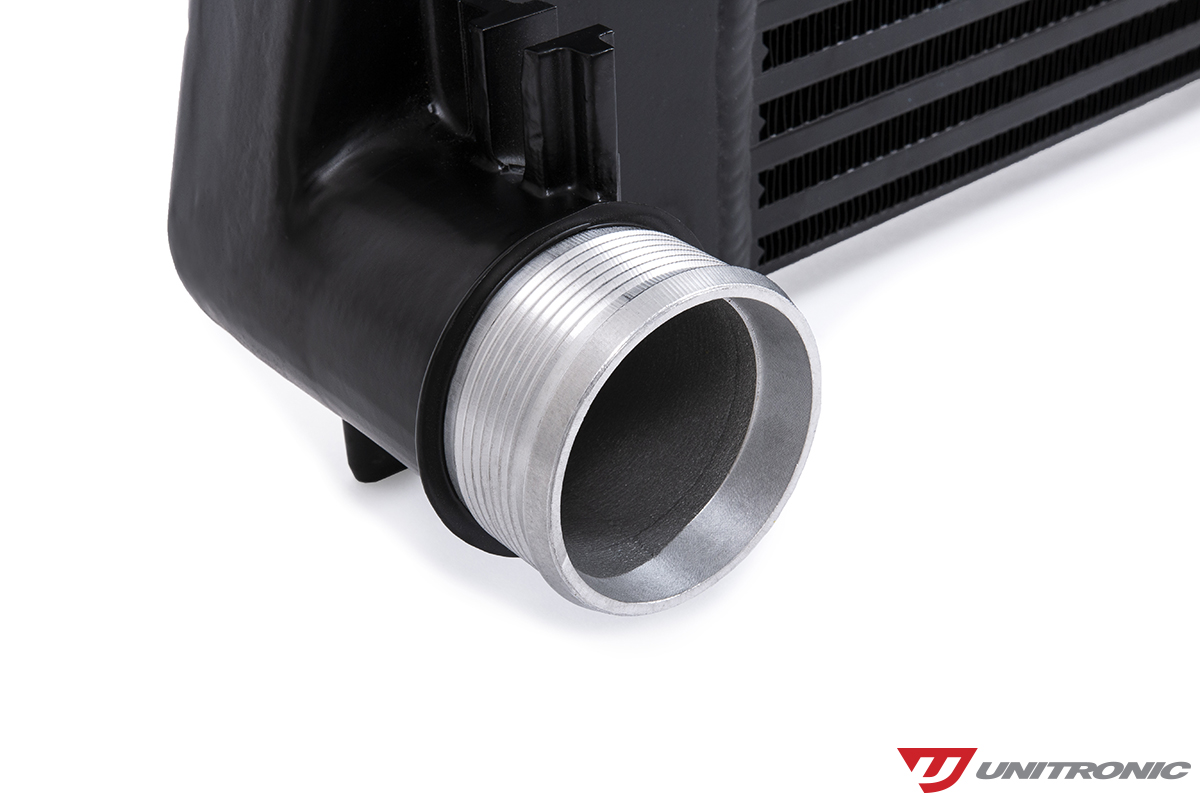 Unitronic's bar and plate intercooler core is constructed of T5052 Aluminum featuring a unique staggered and louvered fin configuration to maximize efficiency, significantly reducing charge air temperatures allowing for cooler, more dense air to be ingested by the engine; ultimately resulting in an increase in engine performance. When intake air temperatures reach a specific threshold, the engine control unit begins to compensate to account for the air temperature, resulting in a decrease in performance. Unitronic's core has 64% more volume than stock measuring 23.5" x 2" x 16.5", allowing for a greater volume of air to exchange heat, which, combined with a proper fin configuration, allows for maximum efficiency and reduction in heat-soak thresholds without producing a significant pressure drop.

Utilizing its 2015 VW GTI for research and development provided Unitronic with a platform in-house to run through the testing. Testing was done on its in-house Dynapack hub dyno, using our standard cooling fans aligned with the front end of the vehicle. The vehicle's front bumper/fascia was fully affixed for all tests and the appropriate data acquisition tools were used to collect pre- and post-intercooler air temperatures. All data was collected on the same day, starting with the OEM intercooler testing first. Temperature probes were tapped into the inlets and outlets of both the OEM and Unitronic Intercooler core end tanks. Ambient air temperature varied slightly throughout the day between 20-22 degrees Celsius (68-72 degrees Fahrenheit). Testing consisted of 9 consecutive dyno pulls with a 20 second pull and a 15 second cool down period in between runs, with both the OEM and Unitronic Intercoolers to collect inlet and outlet air temperatures to provide data on cooling abilities, efficiency, and resistance to heat soak compared to the OEM unit.

The graphs below shows the Inlet and Outlet Air Temperatures for both the OEM and Unitronic Intercoolers, individually for each of the 9 runs. Once again, despite the higher ambient temp during the Unitronic Intercooler runs, and increased inlet temperatures, Unitronic's upgrade provided significant reductions in outlet air temperatures resulting in a cooler, denser charge air being ingested by the engine, resulting in increased performance. It's resistance to heat soak means that the core retains its cooling abilities, even though the most rigorous of conditions.

Unitronic is a leader in Performance Software and Hardware for VW, Audi and Porsche. UroTuning is proud to be a top dealer for Unitronic offering their highly sought after tunes and premium quality performance parts. We literally Delivery the Power and offer Flash at home software with Unitronics Uniconnect Cables.